The benefits of a coconut on the beach in Bali

You are here:
News 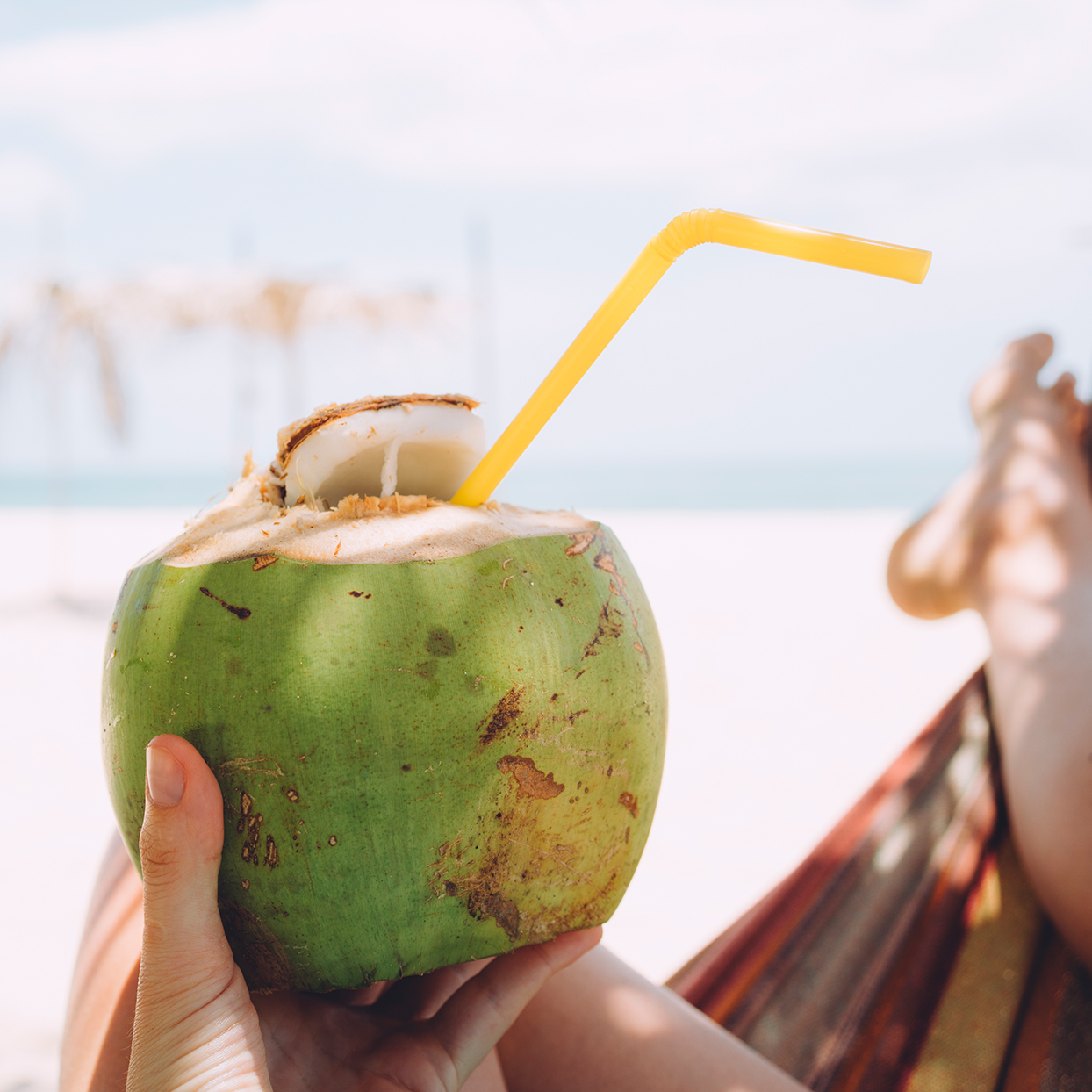 For many people, the idea of kicking back under a palm tree, on a white sand beach, and sipping on a fresh coconut is a quintessential part of a trip to Bali. Not only is this an idyllic way to enjoy a couple of hours but, it is also an activity that is good for the body as well as the soul, because coconut water is packed full of nutrients and has a variety of potential health benefits.

First of all, what exactly is coconut water? It is the clear liquid that forms in the centre of a coconut and should not be confused with coconut milk (which is what you get when you combine coconut water and flesh together). Its 94% water, fairly low in calories (about 46 calories per 240ml serving – about half what you would get in most other fruit juices) and a good source of carbohydrates and electrolytes such as potassium, magnesium and sodium.

Coconut water has received a lot of hype over the last few years, with some going so far as to claim that it is basically a miracle cure capable of fixing whatever ales you. As with all ‘miracle cures’ the more out there claims should be taken with a truckload of salt, or outright ignored, but, there is some evidence that, in the case of coconut water, some of the benefits may actually be real.

So, what are these benefits? I hear you ask.

To start with, all those carbohydrates and electrolytes make coconut water a good post workout beverage choice. Per ounce, plain coconut water contains around 5.45 calories, 1.3 grams of sugar, 61 mg of potassium and 5.45 mg of sodium (some branded varieties increase the sugar content, so remember to check the ingredients list if you are buying from a shop). All of this means that coconut water is less sugary and lower in calories than most leading sports drink brands, whilst providing a lot of the same benefits. One study has shown coconut water causes less nausea when drunk in the large quantities you will need if you want to fully rehydrate after a workout

Any tennis fans may be familiar with the name John Isner, the winner of the longest professional tennis match of all time (it went to 70 – 68 in the 5th set at Wimbledon and took an insane 11 hours 5 mins over three days!). Isner credits part of his stamina to coconut water, drinking it mixed with sodium during matches and with protein powder for post match recovery.

There is less sodium in coconut water than you would find in a typical sports drink and, for this reason, it is recommended that if you are planning on doing an intense workouts of more than an hour, or if you tend to perspire heavily, you may need to supplement your recovery with additional fluids and / or a quick snack. If, on the other, you are just looking for a tasty, low calorie and natural alternative with which to rehydrate after a quick jog on the beach or a laidback yoga session then   coconut water is a great option.

There is some evidence to suggest that coconut water might be helpful for those suffering from hypertension (high blood pressure). We know that potassium is good for improving heart health as it helps to lower blood pressure and as coconut is a good source of potassium, it seems possible it could be helpful in this area as well. It’s important to note though that there are plenty of other fruits and veggies that are also high in potassium (potatoes, bananas and leafy green vegetables, for example).  Some small studies have also been carried out (on rats) that suggest coconut water might help to lower cholesterol, but these have yet to be repeated on humans. Basically. there a few promising signs, but, more research is needed.

So is it worth the all the hype?

Both yes, and no.

Although coconut water is generally safe to consume and has no known side effects, there are a few people who should either avoid it or limit their intake. The high potassium level makes it unsuitable for anyone suffering from kidney disease. It is also high in FODMAPS, meaning it is a no-no for those following a low-FODMAP diet (unless you keep your serving to below 100ml). Anyone seriously watching their weight may also want to be careful – ‘low in calories’ is not the same as ‘ no calories’ and they can quickly add up if you are not paying attention. There are also some recommendations that pregnant or breastfeeding women should avoid coconut water mainly because of a lack of research into whether it is safe or not. Finally, for same reasons that coconut water may be of benefit to those suffering from high blood pressure it is not so great for anyone who already has low blood pressure or is taking medication to get their blood pressure down.

As already stated, more research needs to be done into a lot of the health claims surrounding coconut water, but there are some promising signs and, unlike a lot of natural ‘remedies’, this is one that is (apart from for the exceptions listed above) safe to enjoy.

For most people, coconut water is a refreshing drink that makes a useful natural alternative to sports drinks.

What’s more, setting health issues aside, the memory of sitting on the beach, looking out on a clear blue ocean, whilst enjoying a fresh young coconut is one that is hard to top.